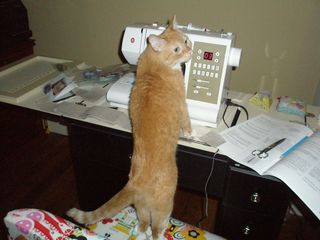 Meet Delilah.  My stitching assistant.  I think she has been in other pictures because she finds all things fascinating, and if she determines that you are doing something she finds interesting, she has to get in the middle of it.  Delilah is Dan's cat that he adopted from a city animal shelter.  She is 5 years old, and had been a shelter kitty for a long time, and with him a year.  I think because of that, she is very easy going.  She also posesses many other great character traits: she likes being around people, loves to be carried, is very playful, responds to her name, only scratches a scratching post, doesn't mind the veterinarian, and is very cuddly. 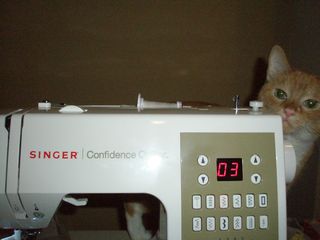 I have never really been around cats much, and really enjoy her.  She also loves thread, watching tennis on TV (she will try to swat at the ball on the screen with her paw), and is known to beg for treats.  After Dan and I are married and I move to his apartment it will be interesting to see how she feels about another female in the house.  Because I often have to find a picture for the blog she didn't try to situate herself into, I thought that Delilah (the name the shelter gave her) was deserving of her own post!

Anyone else with a furry stitching friend?

She is so adorable, lucky you! How ever did you manage without such a wonderful helper? I have two kitties that love to sit in my lap when I stitch. I don't mind except when one tries to steal my floss!

They are so funny! Delilah's new favorite toy is a tomato pin cushion! I don't know how I managed- good question! ~Jaime 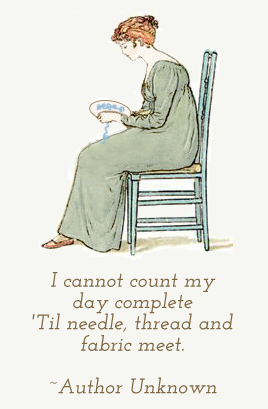